The Cat from Kosovo 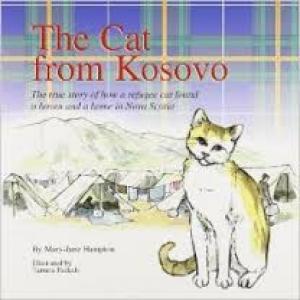 Product Description: One day Olsa and Bashkim opened their doors to a small brown-and-white striped cat, they opened their hearts too. But the rather ordinary happiness of their lives was threatened as the war in Kosovo grew nearer. Forced to leave their home, they gathered all their courage and the few things they simply could not leave behind, journeying first to Macedonia and then to Canada. But no one at the receiving centre in Greenwood, Nova Scotia would have guessed that of the more than two thousand immigration cards issued for the refugees, one would be for a small brown-and-white striped cat — the cat from Kosovo.