Pura Belpré: Her Life and Legacy

Pura Belpré was the first Puerto Rican librarian to be hired by the New York Public Library system. A gifted storyteller and puppeteer, she celebrated the stories that had been handed down across generations of her family, and her story "Pérez and Martina," which she published in 1932, has become a classic of children's literature.

Pura Belpré also believed in welcoming everyone to the library, offering numerous programs and titles in Spanish to her neighbors at a time when such "community outreach" — especially to the Spanish-speaking community — was unheard of.

Learn more about Pura Belpré, her legacy of librarianship, and the children's book award in her honor from the following resources! 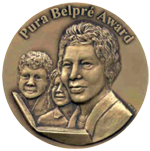 The Pura Belpré Award, established in 1996, is presented annually to a Latino/Latina writer and illustrator whose work best portrays, affirms, and celebrates the Latino cultural experience in an outstanding work of literature for children and youth.

It is co-sponsored by the Association for Library Service to Children (ALSC), a division of the American Library Association (ALA), and REFORMA, the National Association to Promote Library and Information Services to Latinos and the Spanish-Speaking, an ALA affiliate.

For additional awards that celebrate diverse perspectives, see the award list in our multicultural literature section. 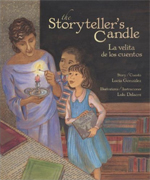 This is the story of librarian Pura Belpré, told through the eyes of two young children who are introduced to the library and its treasures just before Christmas. Lulu Delacre's lovely illustrations evoke New York City at the time of the Great Depression, as well as the close-knit and vibrant Puerto Rican community that was thriving in El Barrio during this time. Bilingual text.

The Stories I Read to the Children

In The Stories I Read to the Children, Lisa Sánchez González has collected, edited, and annotated over 40 of Belpré's stories and essays, most of which have never been published. Her introduction to the volume is the most an extensive study to date of Belpré’s life and writing.

This book documents, for the very first time, Pura Belpré’s contributions to North American, Caribbean and Latin American literary and library history as one  of the most important public intellectuals in the history of the Puerto Rican diaspora.

Learn more about Pura Belpré from the author and illustrator of The Storyteller's Candle — Lucía González and Lulu Delacre!

The full interviews with Lucía, Lulu, and Meg are available in our Meet the Authors section.