The Civil War and Reconstruction Eras (The African American Experience: From Slavery to the Presidency) 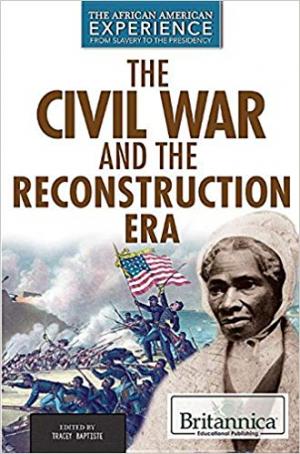 "Concise and direct, this series explores the cause-and-effect relationship between slavery and other issues, such as the abolition of slavery and the enacting of segregation. The books also examine political and economic injustices faced by African Americans, past and present, and relevant court cases. The writing is straightforward, and the authors lay out step by step how an event happened or how a law came to be. The main narrative is bolstered by sidebars featuring key players, including well-known figures such as Booker T. Washington and less familiar but still pivotal figures such as Robert Smalls. In Barack Obama, the author tries to do too much: discuss major achievements by African American celebrities, describe the highs and lows of President Obama's time in office, and examine injustices faced by African Americans. As a result, the coverage of each is cursory. Sans serif fonts, subtle backgrounds, and a few archival photos and maps enhance the visual appeal." – School Library Journal