Coyote and the Sky: How the Sun, Moon, and Stars Began 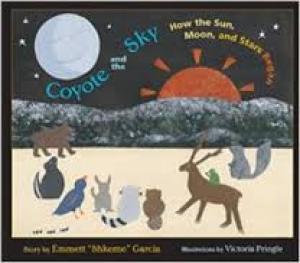 According to Santa Ana Pueblo legend, the animals' spirit Leader created the sun, moon, and stars by using woven yucca mats and hot coals. He selected certain animals to climb from their homes in the Third World up to the Fourth World, but Coyote was forbidden to accompany them because he was always causing trouble and stealing food from the others. Regardless of what he was told, Coyote refused to stay in the Third World. Coyote's punishment is a lesson in what happens to animals, or people, when they refuse to obey instructions.