March On! The Day My Brother Martin Changed the World 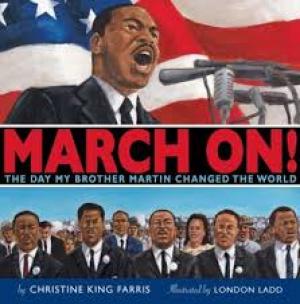 Martin Luther King, Jr. prepared diligently for his now famous "I have a dream" speech given on August 28, 1963 during the March on Washington for Jobs and Freedom. It was King's unshakable belief in nonviolence and the power of words that galvanized the country. This informal account is both personal and satisfying as revealed by Martin's older sister who watched it on television with their parents in Atlanta. Full-color illustrations and expressive typography highlight words and enhance the tone.