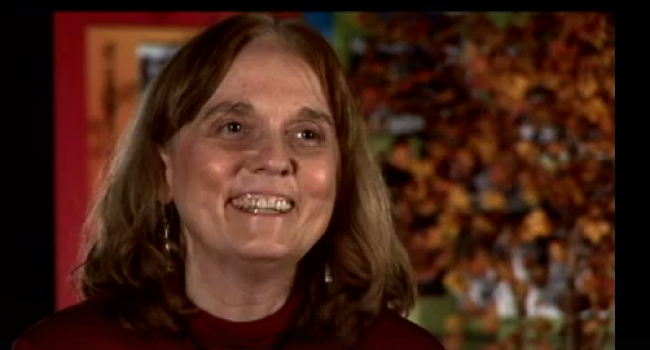 Janet Davis is a professional development advisor with the Los Angeles Unified School District. Janet has also worked as a Spanish Bilingual Teacher, a Bilingual Program Coordinator and an instructor for the District Bilingual Master Plan Teacher Training Program. In addition, Janet is a member of the American Federation of Teachers' ELL Cadre and a former professional musician.

In this interview, Janet discusses California's long-term ELLs, the connection between the civil rights and language rights movements, and the importance of encouraging success.

So we've mis-identified what we should do. If all those students came from another country and didn't speak English, we would be ready. But that's actually not what we've got. We've got kids who have been here, who actually speak English quite well. They don't have academic English. They don't have reading comprehension.

And if you just imagine that if you're in school for three or four years and you don't know what the teacher's saying, you might get some things. But there are huge areas which you'll just blank out on because you don't have enough key words to be able to understand the lesson. And one of the things they said in (California Together's Irreparable Harm) report was that the ones who don't drop out become, they hide in the classroom. They're just very quiet, well behaved. And, you know, they're being classified as not too bright, which is not true.

And so what happens with, they're not a population. They're not the same. And that's what's difficult about it. Some of them lack academic knowledge they missed. Some of them don't have good reading comprehension. But they can read - words. And they can decode. So putting those students into an ESL class where they're learning to decode and to do these very basic things is what is holding us down. We don't have specific programs for these kids. So we just stick them in the ESL class where the other students are learning English and you already know it. And you need, you need something, but that isn't it.

One of the suggestions they had in something I was reading was in secondary putting them into the Spanish language class where they could demonstrate all this literacy and could respond and have that, first of all, very positive experience of succeeding, but also just acclimatizing themselves to the school and the country. But they would have ... you could then be demonstrating that, yes, grade level in history. Grade level, you know, that the person does have grade-level skills. And they just were learning English.

The thing that we see is they stick up vocabulary on the wall. But then they don't put in any sentence structures to help the kids be able to use that language. Like making a comparison, you need certain kinds of words. "Before and after," "that was earlier," you can just think about what will the answers be to the questions I'm asking? How can I structure something so they can think about the conceptual answer and not be struggling with language?

And it seems babyish, but it is not. Because it's hard to think about something hard and also be trying to figure out how to say it. That's, your brain overloads. And we've seen a lot of success with that because you're fluent also. Because you're following this. Which builds fluency, as opposed to just making them struggle and they barely can get out an answer. And it might be partially right. But because they can't express it, the teacher says, "Well, I think that's close. But" You know, it goes to the next student.

So I think there are conscious, the things you can read about it. But part of it is you have to be aware in your own classroom when it bombed, figure out what it is that would have made it better. Because there are theories and there are things to do. But in chemistry, you probably don't need the sentence thing so much. But maybe you'll need a pictorial of process of activities, making a flowchart of what they need to do. That might be the scaffold that will make the difference for them.

The advice I would give to new ELL teachers is follow the program properly in the beginning, like don't, we have now some good programs that are sequenced. And follow it because there are things in there that you may not understand why they're important. And hopefully we're talking about a good series that will walk you through best practices.

And then after you've gotten very comfortable with those, then you're going to be able to start designing your own lessons because you're going to have a very complete understanding of the various levels and functions that your lessons will need to have.

I've done several presentations on the parallel of the civil rights movement and the language rights movementfor example, the Lau case, the famous one that came to the Supreme Court eventually. Those students were actually racially segregated. They were not taught in their...in Chinese. They were taught in English.

And so, the history really is about race. And language is an excuse which is what they did in the Westminster case. They looked at children. And if they were brown, they went over to the Spanish school. They weren't using, it wasn't really about language. It was really about race.

And so, I think historically we don't quite understand that. But when we see the civil rights movement, it was at the same time as Caesar Chavez. So it's like there is a ... they parallel beautifully. And they were phoning each other. They never saw each other, Caesar Chavez and Martin Luther King, Jr. They definitely were coming from a similar organizational push.

Having translational equipment at your school, so every time you do a meeting, you can take ... everybody who's not bilingual, wears headphones. And then when you're sitting around the table, if I'm speaking Spanish, the English people are hearing it from the translator in English. If somebody's speaking English, they're hearing it in Spanish.

And that makes a totally seamless meeting where you don't have to stop and translate. The meeting doesn't take twice as long. And you start to have a real sense of communication. You can look at the person speak Spanish. And the translator's going to make you understand it. And you really do see a quantitative difference in communication and trust.

Parent involvement, parent communication, is the most important reform we have left to use. Because we've done all the rest of it. We know that parents' involvement is a huge factor. And yet, we don't use it very well. And most people still think of parents as somebody who sets up the carnival or sells the chocolate or in some way gives money to the school. And the mindset is that you're supposed to raise money for the school. That's what parent involvement means. And that is not very transformative. When instead you start saying what, if the parents are doing well, the kid will do well.

The other thing that has been suggested is when you have parent meetings, videotape it. So that parents can check that out. Even though they couldn't come to the presentation, they can check it out and get a comparable experience. And the idea that it's only this rigid way that's kind of convenient for schools, it obviously doesn't work. I mean, we don't have to really argue. That is the way it's been.

So instead, if you've got the parent center and even things like when you're having problems with your landlord because they're not fixing the toilet or whatever, when you're not getting satisfaction and a lot of it is because they don't speak English, they may have some paper problems or whatever, we can hook them up with the services that do help people who are having those issues.

Where else are they going to go? Who else will they trust enough to tell this problem to? Who could actually direct them to get some help? Having them work in the classroom, parents are gaining some real skills. And one of the aspects of an effective program would be that after they've volunteered and done enough things in the school, they would be more confident and have work experience.

So you have the parenting and you have volunteering. And that means broadening the volunteering. Like everything you should do should be for, every parent should be able to access it in some way. And then as they come to understand the program, then they're going to feel much more confident in the governments when they're representing in the councils.

We think of it as overwhelmed. We are overwhelmed. But when you get a really good parent/teacher collaborative partnership, your life gets much easier. You're going to have an easier time with discipline. When you call her up, you know her. And when you talk about a problem that the student's having, she's not going to come and attack the teacher. She's going to come and be a partner with you to help the student.

One of the students that surprised me and ended up being a good lesson on literacy and English acquisition was Eduardo. And he was very smart and very aware, but ... and his math was stunning. But he just didn't learn English very quickly.

And so, we were a little confused by him. But in sixth grade, his English kind of came together. And then he did very well in high school. He went to the Claremont College. And he's an engineer now. So I thought that was very, I'm glad I saw that experience, that I recognized he was very bright, but there was something about language that his brain just didn't do as well, where his brain did everything else incredibly. And that was a lesson of saying you don't yank them out of a bilingual program until they're ready. Because if you're committed and you let them stay, you get the payoff. So I saw it. I knew the family. And it worked.

I was a musician before I became a teacher. And through high school, I was considered a good player. But nobody ever said to me, "You could actually become a professional musician." Since nobody had said that to me, I assumed that that's what was true. And I think that's what happens to kids, is people tell them, either subtly, like nobody said, "You can't do that." But they definitely didn't encourage me to think about doing it.

And I think that's what happens to a lot of our students because nobody's saying, "You can go to college." They just don't say anything about college which is the same as saying "You're not going to be able to do it." Because the silence speaks.

And then I went to Berkeley, UC Berkeley. And the conductor auditioned me. And he said, "You know what? You really have something special. You could become a musician if you want to." And it was like that moment. And I did become, I went to Cal Arts and I was a professional musician. And it's that one teacher who said, "You could do this." Or I wouldn't have done it. Because I just didn't think that was a possibility.