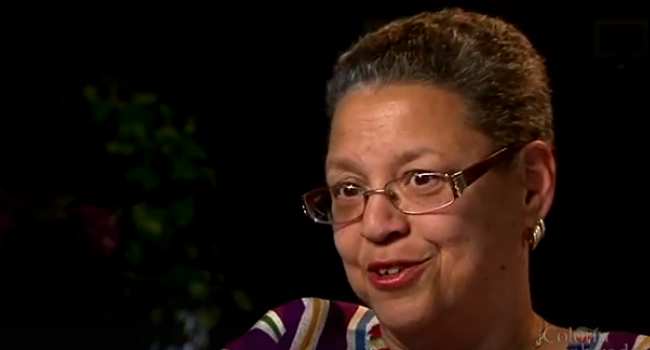 Miriam Martinez is a kindergarten teacher in the South Valley of Albuquerque, New Mexico and a member of the first-grade cadre in our Common Core in Albuquerque project.

She is also a member of the American Federation of Teachers' English Language Learners (ELL) Cadre, which advises Colorín Colorado on ELL issues.

In these video clips and journal entries, she shares her reflections on the Burro's Tortillas lesson plans and the reasons that she optimistic about the Common Core.

I came from Cuba when I was 10, so I came in November and I remember crying the first night because I went to my cousin's house, that's where I was going to stay and they said you know brother and sister they told me something one each and I couldn't understand them and I was crying.

And then about when November, diciembre, enero, febrero, (December, January, February) 3 months later we were coming back from the supermarket with the shopping cart, and I was ahead and this guy gave me a flyer. So I turned around and I said, "Okay," so I turned around and I told my aunt, "Look there's a free dance and blah, blah, blah," at what the flyer said. And she said, "How do you know all of that?"

And it was like, that was when I realized that the guy I had been talking in English, I had read the flyer in English and I was able to translate it to her, but that was, that was three months later was when I was cognizant of the fact that wow, I did it.

And then I think within that week it wasn't that same night but within that week I was going to sleep and I could recall what my cousin had told me and one of them had told me, "Do you like to watch TV?" And it just came to me, and the other one had said my favorite, "My favorite is 'American Bandstand'" or something like that.

And it was like it just came to me that you know once I realized that I was speaking English it was like I understood what they had told me three months before. So anyway, I'm an ELL.

How reading helped me

I'm a reader so what's happened to me is I would read a word and I would understand it but I know, but I don't know how to pronounce so for years I was saying "chaz-um" to myself as I read, and then somebody else says, "No, it's chasm." And it's like, "Oh!" So that happens a lot. But I'm a reader so that's important and that's the way I've survived, that's the way I learned putting things together.

Well I'm actually a kindergarten teacher, dual language. I work in South Valley, Albuquerque way down in the South Valley. What we're getting now because of the economy is lots of parents coming back to their parents' home. So grandchildren being raised by grandparents. So that's mostly what's going on.

And then our population of Mexican nationals that, that is steady, they're there. I'm teaching, this year I'm teaching a lot of the younger siblings already. So they're not coming in with as much Spanish, they're coming in with some English also, so it's interesting.

It's 90/10 and I do all of the, all of the language arts is in Spanish so whatever the reader is, everything is in Spanish. And then the rest of the curriculum is bilingual, más o menos (more or less).

And because I have so many English speakers this year, I'm really doing more like an 80/20. Just because I don't stop them from singing English songs or reading an English book like when we did Dr. Seuss, you can't find everything in Spanish. So I was like they have to listen to it anyway, they have to understand it, so here we go, this is it.

And then do a lot of the techniques that I'm actually learning about ELLs, you know especially about the rendering of the text, you know I don't take anything for granted anymore so that's how we do it.

Then I have the families that are all you know they understand that you need to keep up both of them that it's and I give them all of the research about you know you're smarter, you know all of the cognitive rigors of the situation is good for everybody. So I give them that and they believe it.

And then there's the ones that, you have to really like, I don't know beg them sometimes to just give it a try because they don't believe you and they're usually like the ones that, that have just come to the United States or it's their first child in the system and they insist that they learn English and it's like, "But they're going to learn it."

So it was like okay I'm going to concentrate more on English so we're going to start writing in English and reading in English and one of my favorite little boys who just graduated from high school said "¿Maestra, cuando me enseñaste a leer en ingles?" (Teacher, when did you teach me to read in English?)

Because he picked up the book and he knew all of the, the and this and the that and whatever, and he was just reading along and he was, and I discovered by 3rd grade if they really have that balance, whatever level they are in Spanish, they're in English, it just comes together for them.

Because reading is one thing they need to do, one process. So whether you learn it in English, German, Spanish you learn it and then you apply it to something else so I always tell them that story and they go, "Okay, I believe you."

In terms of the common core I am so glad that I'm in this group and through the union because what I'm learning here and is what is presented at the school level, are you know completely different approaches you know. And there was nothing in August and now there seems to be everybody is doing Common Core and everybody is aligned and you know I sit there and I laugh because I tell you, "Oh we are aligned with the Common Core?"

The promise of the Common Core State Standards

I was one of the people in the 90's that did not embrace the standards movement, not so much because I did not believe in them, but because I saw how they lost steam and we all went back to business as usual once we were done with the task of unpacking the standards.

As I reflect on the work we have done so far, I am still a fan of augmenting the lesson sequence with critical empowerment. As primarily a language teacher, highest on my priority list is meaningful learning experiences that build literacy. I am ever conscious of the fact that my students tend to be economically disadvantaged, and consequently at a low experiential threshold for experiences greatly correlated to student achievement.

My priority is to engage them in meaningful experiences. I believe I can achieve this by making one of the broad learning objectives for students the awareness of the various opportunities that exist and to let them explore its constructions with purpose. This understanding will help them see the powerful potential of schooling on their lives.