How I Learned Geography 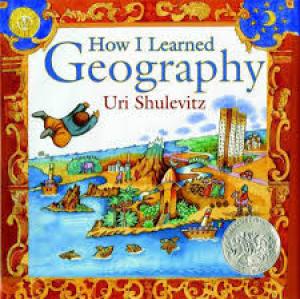 As a young boy in 1939, Uri Shulevitz and his family fled Poland for the Soviet Union. They lived for a time in Turkestan, where Uri's father returned from the market one day with a large world map. Initially, Uri and his mother couldn't believe that his father had bought a map instead of bread. Eventually, however, the exotic names and places on the map captured Uri's imagination as he spent "enchanted hours far, far from our hunger and misery." Whimsical and colorful illustrations of Uri's imagined journeys provided a dramatic contrast to the earlier depictions of the family's suffering.