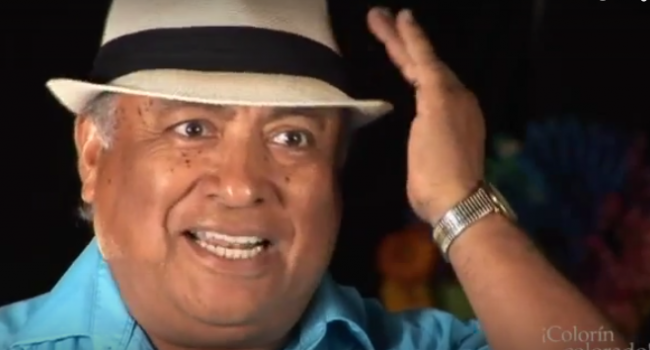 José-Luis Orozco is a bilingual author, educator, and recording artist. Through his live performances around the country and his popular albums, he shares his love of Latin American music and songs for children. In this interview (also available in Spanish), José-Luis talks about the connection between reading and music and the ways that parents can preserve their family culture. And, of course, he sings some of his favorite songs such as De colores, Los pollitos, and El baile de los colores in English and Spanish — you don't want to miss it!

I was born in Mexico City and I grew up actually in 34 countries. I left home when I was ten with the Mexico City's Boys Choir and I went back when I was 13.

Getting started in Berkeley

Berkeley actually had a consortium of five school districts in the Bay Area and I was singing in the classrooms for the bilingual programs and then also I was singing for parents at parent meetings. I was training teachers with the music that I had learned as a child; songs, games, lullabies, all the oral traditions that I had learned from my grandmother, my mother, and through my travels.

The parents and the teachers were telling me this is what we need for the kids. We need to make them feel good, this is part of the culture and their first language is very important for learning. So it was a very, very positive reaction from the parents and teachers and the children.

I realized from the very beginning that it was something that would make the children happy, that they would learn, that it was needed also. And there was a big, big space for met to fill. And I decided this is what I really would like to do, you know, preparing myself, go to college, learn more about the methodologies, the culture and the teaching techniques and use the music that I know, do more research, write songs for the children and that's what I've been doing since 1971.

There was a great need to preserve, to transmit, to teach the children the Latin American children's traditions. Since you know the bilingual programs needed that. And I was one of the new ones who had that information. So there were very few resources available. I was doing the teacher training. I was doing the parent training. And they were asking me all the time, "Where do we find these songs? How can we use these songs at home? How can we use them in the classroom?" And that's when I decided to start recording and then self-publishing the songs and compiling more and then that's how it grew, you know, to what it is now in books and CDs and in videos.

The teachers were getting the training and they also knew and they were asking also for parent involvement. And I was really much involved in parent involvement also, visiting their homes, visiting and even trying to help them. Part of my time was also helping as community liaison, besides just teaching the songs to the children and doing the teacher training. So teachers were very happy to know that I was connecting the community with the school.

Start with something familiar

You can start with the song or you can start also with a rhyme, the 'Sana, sana, colita de rana' is universal, everybody knows. So then you see the smiles. And then if you start, if you start you know with tongue twisters 'Erre con erre, guitarra', 'Erre con erre, barril' and then they say, "Oh, yeah, I remember that one. And then I remember another one and another one and another one." So we just need to open their minds, open their hearts, because they have something to contribute to their children.

Then at the end of the workshop they bring the kids and we have a sing along with parents and children, and sometimes with teachers. So it is important to have resources available to organize those events you know in a nice fashion. And then the children, while I'm presenting to the parents maybe some teachers are with the children reading to them or singing with them. And that's something important to do, keeping them busy and learning.

Children learn through sounds. At the very beginning we give them the sounds, phonemes, phonetics, all of that is important. So when we give them cho, co, la, te, ba, te, ba, te. We're giving them magic sounds. We're giving rhythm. We're giving them tradition. So when we sing Los Pollitos we're giving the kids something that probably they'll learn from their parents. And then that helps them with their self-esteem, helps them with the sounds, learning sounds. And then with that it helps you know with the reading and the writing later on. So we promote literacy through music also.

It's important to learn English, but many parents don't speak English. We tell them if you don't speak English give them as much as you can in your mother language, in Spanish. And then those, all those tools are going to help the kids. They are going to be easy to transition from one language to the other once, you know they have a good vocabulary it's going to be easy. And the concepts also that go with the words.

The concept of numbers, uno, dos, tres, cuatro, cinco, and then they will learn it in English too, one, two, three, four, five. And all of that is, you know, can be transferred very easily. If they don't give them any language obviously it's going to be harder for the children. If they don't read to the parents it's going to be harder. So it's good for them to read to them, to sing with them, to play with them and to give them as much language as possible.

Sometimes they don't think they have it, but they do. They were children. They learned the lullabies from their parents or grandparents. They learned the games in their countries. They had learned at least something. And if they don't remember them then they can go to the library and get books, get the music, get the cities, take the children you know to concerts. And the children will learn with the neighborhoods if they also speak Spanish. And then they learn through play. They learn through singing, through doing the oral traditions.

I tell parents that it's very important for them to sing, to play with them the old games, 'La víbora de la mar' y 'El arroz con leche', 'La rueda de San Miguel,' to do the finger plays. So it will help the kids, help the kids, you know, also in school, because the teachers will be using the same materials, now that there are more available now. And I tell them you know read to your children too. It is important to read.

By region you know we find different versions. 'Arroz con leche' in one place, in another place it's 'Arroz con coco.'  In one place in Argentina the song La Chacra  is very well known. And in other places we know it as Mi Rancho or La Granja. So there are variations depending on the region. Even in Spain where most of these traditions came from, they have different versions in different regions.

There have been changes, you know there's more diversity, the communities are growing more and more diverse. And that's something that is beautiful. That's what I promote through my work, through the songs, through the books, promoting diversity is very important. It's very important for the children to understand each other to understand other cultures. So they will appreciate more their communities. And they will have probably better communities in the future if they understand and respect each other.

Using music in the classroom

You know now more and more and what is nice to know is that they are using my music. Buenos días, ¿cómo estás?, Muy bien gracias, ¿Y Usted?

And we can do it in English and in Spanish — "Good morning, how are you?" And then singing the drum song, the Panamanian song 'El tambor de la alegría' to sing their names, to welcome them, to make them feel good. So the teachers are using them and it is nice to see that.

There are so many, many stories. I have actually touched on more than three generations. I have run into people that were kids at the time I started singing and now they have their own children or their grandchildren. And they pass, are passing on the songs that learn from my books and my recordings. That's very rewarding. And also I go to the classroom sometimes and then after my presentations teachers say "Oh, you know, this child has been very quiet and this is the first time that the child opened up through the songs. He wouldn't move and then he or she is moving and learning and responding to what you were doing." So that is very, very rewarding.

This is one of my books, Rin, Rin, Rin/Do, Re, Mi. We've been using this book to promote literacy all over the country. And it was written by José-Luis Orozco and illustrated by David Díaz.

A,B,C
Say letters to me!

Hello, my name is José-Luis Orozco. I'm going to sing some songs for you today.

♫ Good morning.
How are you?
Very well, I thank you.
How about you?

We can sing it in English too!

♫ Good afternoon.
How are you?
Very well, I thank you.
How about you? ♫

And now we're going to sing the ABC, or ABCs if you repeat it many times.

We are going to sing it in English, now.

This is "The Colors Dance."

This is a song of the colors, the colors of nature, colors of people. The beauty of life — "De colores."