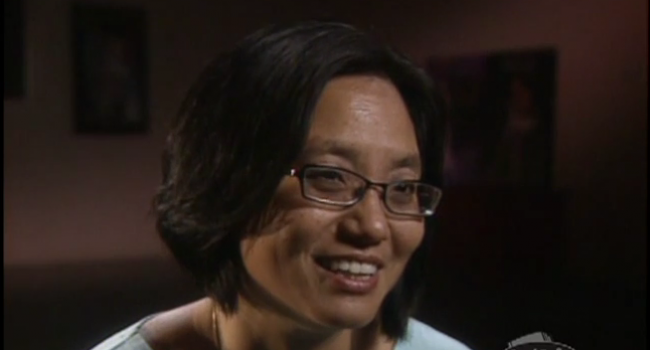 Linda Sue Park is the Newbery Award-winning author of A Single Shard. In this exclusive video interview, Linda Sue Park compares writing to sports, questions animal sounds among different countries, and reads an excerpt of The Firekeeper's Son!

I have been writing for just about as long as I can remember. I could already read and write when I went to kindergarten. And you know how, in kindergarten, you have choice time, or free time? Whenever we had choice time or free time, I would always choose to write a story. My kindergarten teacher worried about that, and actually I remember also her once asking me, "Linda Sue, would you please choose to do something else today?" because she was worried about this. I have been writing as long as I can remember.

I have to say that I think I probably took the library for granted, because my father had been taking me since before I could walk, probably. For him, as an immigrant from a country that had been through a couple of very devastating wars, where libraries were not a real high priority, the libraries in this country were a miracle. He just couldn't believe it. He was 19 years old when he went into his first public library ever, and if you think about it, it's a very bizarre concept: "I can walk in and take whatever I want?"

You know, you can't do that with anything else, and it's really kind of an alien idea.

All of my favorite books were, for me, exotic stories. I would include in that something like A Tree Grows in Brooklyn. I was a Midwestern, suburban girl. I lived in a small town near cornfields, and Brooklyn was exotic to me. It was this big city, which I had never lived in, and Francie Nolan lived in this tenement, which was a very different setting for me. And, yet, she loved the library, and she loved to read. So, finding something in common with people who lived in very different circumstances was by far the most rewarding thing for me.

And I think that's what books can do for young people. They're a bridge. They're a way to get to know people who are very different and to say, "But wait. In a lot of ways, they are like me."

It wasn't until I was grown and had children of my own that I realized, "Oh, there's probably just a treasure trove of stories in my own family that I've never looked into."

Some young people may come to that much sooner than I did, and they may well be interested in, "Grandma," or, "Grandpa, tell me about when you were young." "How was it different in whatever country you lived in?" And if that's the case, wonderful. Write them down. Oftentimes, it's grandma and grandpa, or even your parents who can't write in English, or can't speak in English, and can't share those stories in the way that you can. You can help, even if it's only writing down a story or two of your grandparents that you then just show to the rest of your family.

My daughter kept a swap journal, which I think is a wonderful idea. She would write something, — a letter, a poem, a little story — and this was when she was in third or fourth grade. She would give the journal to her friend when she'd finished, and her friend would write something back, either a letter back, another poem, or something completely different; they didn't have to follow up on what the person before had written, and then she'd give it back to my daughter. Each time, they'd keep the journal for three or four days. They kept that journal going for the entire school year.

So, somebody else was reading what my daughter had written, and I think that, for many people, that's another reason to write. It is an act of communication. You want someone else to read what you've written.

I ask the young people to try to take writing and put it in the same compartment in their head where sports and music lives, to say, "Oh, yeah. Of course. In order to improve at writing, I'm going to have to repeat, or write the same thing again, and try to improve it each time." I ask them to try to take it for granted that writing belongs in that same kind of category so that they don't say, "Oh, no. I have to rewrite this," but, rather, they say, "Oh, well, duh. Of course have to rewrite it. It's not gonna be good the first time." So, I ask them to try to think about writing in a little bit different way.

I actually got two books that came directly from my experience as a teacher of English as a Second Language. When I first would meet a new classroom of students, they were often newly arrived in the United States. My class would be one of the first ones they would take, English as a Second Language, and they were often really nervous. As an icebreaker, I used to ask them about animal noises in their language. So, in English, what does a dog say? "Bow-wow," or, "Arf, arf." But dogs all over the world don't say that. I learned, for example, that in Korea a dog says, "Mung-mung." When I take it into schools, I'll say, in this country, "Does a dog say, 'mung-mung'?"

In Russia, a dog says, "Gahv-gahv." I learned that there are these wonderful animal noises all over the world that people make. So, I have a book called Mung-Mung!, which is a guessing game book of animal noises around the world.

What I've always said was my dream is to be a fly on the wall, or maybe dead and floating around wherever dead people go, and to hear a young person, or any reader, say, "Oh, I've just read this fantastic book. It's by — it's by — oh, I can't remember who it's by, but it's about" and then they go and talk about my book. I think the stories, again — stories, in general — are much more important than any one person as an individual. I don't mind if people forget my name — as long as they remember my stories.

Linda Sue Park, Korean American author of children's fiction, has been an avid reader and writer her entire life. In fact, she began poetry and story writing before kindergarten — at the age of four. Growing up outside of Chicago, one could often find this notorious bookworm grazing the pages of Nancy Drew, Laura Ingalls Wilder, and E. L. Konigsburg. At the age of nine, Park had her first publication — a haiku — in Trailblazer magazine. She received a one dollar check for her hard work, which she gave to her father for Christmas. To this day, the un-cashed check is still framed above his desk.

Park advanced through school with several other publications. She attended Stanford University, where she earned a degree in English and competed on the gymnastics team. Upon graduation, she was a public relations writer for a major oil company. Although it was an outlet to write, she was not satisfied with her profession. However, it taught her how to be more of a professional writer.

Two years later, Linda Sue Park and her future husband packed their bags and moved to Dublin, and later to London. In Europe, she earned advanced degrees in literature at Trinity College and the University of London. Happily married with two children, Park worked at an advertising agency, then became an ESL teacher to college students, and later worked as a food journalist. Throughout her busy life and many job changes, her love of writing flourished.

Park's husband's career relocated the family to the United States, where she continued to teach ESL — something she still does to this day. She also had this great idea of writing her first children's book — Seesaw Girl. Her work mainly focuses on historical fiction. Seesaw Girl, Kite Fighters, A Single Shard (2002 Newbery Medal winner), Project Mulberry, Bee-Bim Bop, and Archer's Quest all delve in to the Korean culture and history — embroidery, kite fighting, celadon pottery, silkworms, and Korean food.