New Freedom Park and the Immigrant Families Who Designed It 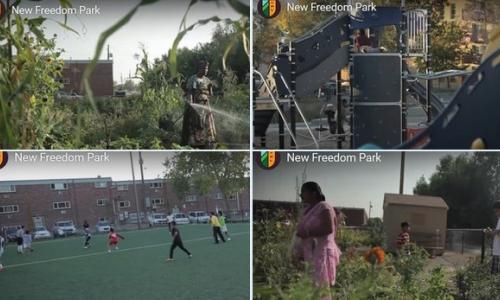 Learn how a diverse group of immigrant families in Denver, CO came together with the non-profit Trust for Public Land to design their new local community park.

New Freedom Park is a Denver community park and garden which opened in 2012, built through a partnership between Denver Parks and Recreation Department and The Trust for Public Land.

What caught our attention is that the local community of refugees from countries such as Nepal, Burma, Somalia, and Afghanistan played a significant role in the park's design and planning.

In this interview with Colorín Colorado, New Freedom Park Project Manager Wade Shelton describes the process of engaging the refugee community in the park's design, overcoming language barriers in meetings and procedural votes, and learning to set assumptions asides when working with newcomer immigrants and refugees.

See this "before & after" video of the park from the TPL website!

Tell us about the Trust for Public Land.

The Trust for Public Land (TPL) is a national non-profit land conservation organization that has worked to protect land for people by creating new parks, open space, gardens and natural areas throughout the United States for the past forty years. We have 38 offices in 50 states and accomplish our mission by acquiring land and / or property interests and conveying it to the appropriate government agency or non-profit organization for long term management, by design and building new parks, playgrounds and community gardens, and by working with communities to create dedicated funding sources for open space projects. More information is available on the TPL website.

What is New Freedom Park?

New Freedom Park is a 2-acre property located near the intersection of 13th Ave. and Xenia Street in East Denver, approximately one block from Denver's boundary with the City of Aurora. The park includes an artificial turf multi-purpose field, playground equipment for children up to age 12, two half court basketball hoops / courts, a community gathering space / ampitheatre seating around the large cottonwood tree on the property (the only shade on site), picnic tables, a 50-plot community garden, garden planters and other aesthetic plants, and Westerly Creek, a small stream that runs through the center of the property, which is a rarity in an urban setting.

Who is part of the community that it was meant to serve?

The surrounding neighborhood is comprised primarily of low income residents, as three affordable housing communities are within two blocks of the site. The Grace Apartments, operated by Mercy Housing, are directly adjacent to the site and specialize in housing for refugee families. Hope Communities, also operates an affordable housing complex, the Hidden Brook Apartments, which is adjacent to the park. The Colorado Coalition for the Homeless operates the Xenia Village about a block from the park. Combined, these three communities house over 1,000 residents, half of whom are children, within walking distance of the park. The park was designed and built to meet these specific residents' needs, as there are no grocery stores in the neighborhood along with very few outdoor recreational opportunities, making access to healthy food and outdoor recreation critical to the entire community.

How did the project begin?

The project grew out of a small community garden on the vacant lot created by Denver Urban Gardens (DUG), a Denver non-profit organization that creates and manages community gardens throughout the Denver Metro Area. That garden helped to illustrate the need and enthusiasm that the community has for outdoor recreation opportunities, making developing the site as a park and expanding the community garden a priority for (former) City Councilwoman Marcia Johnson and the Denver Parks and Recreation Department (DPR).

However, the City did not have the resources to design or build the park, and DPR approached TPL in March 2009 about taking on the project on their behalf. As the only national non-profit that works in urban areas and builds and designs park, we were well suited take on the project.   We agreed to take on the project and raise all of the funding required to design and build the park, manage and complete the community design process, manage and complete the permitting process, and then work directly with DPR and its contractors to construct the park and see it added to the Denver Park System.

How was the community brought into the design process?

The community was brought into the design process through a series of public design meetings that enabled them to identify their goals for the park, design several park layouts, and then vote on a final design to ensure that the park met as many of the community's needs as possible. We have found that this "bottom-up" approach to park design ensures that the final product will be well used by residents.

What were the roles of the schools and partners in the planning?

Schools did not play an active role in the planning process, as most of the children in the community are sent to schools relatively far away from the site that specialize in students where English is a second language. However, the community partners DUG, Hope Communities, Mercy Housing, and the Colorado Coalition for the Homeless were instrumental in the planning process, providing the space needed to conduct planning and design meetings on site, translators, and ensuring that residents were aware of and attended each meeting.

How did the park planners address cultural differences and language barriers?

Cultural and language barriers were a particularly daunting challenge since so many residents came from backgrounds where their opinion is not valued by people in authority (particularly for women), making it challenging to get residents to speak up and say what they thought, as opposed to what they thought the park planners might want to hear. Fortunately, DUG's, Hope's, Mercy's and the Coalition's experience working their residents enabled us to bridge these barriers, as well as provide the translators that we needed to communicate effectively with the residents. Without their involvement the project would have been much more difficult to accomplish, particularly in light of the fact that at least four different languages were spoken at each meeting, none of which were English or Spanish.

Given the many languages, tell us about the process of voting on the park's design.

We used pictures and visual aids to illustrate the kind of elements that could be included in the park (e.g. – basketball, soccer, playground equipment, etc.), so that residents would be able to easily identify their priorities using colored stickers. That way, we could be certain that the various elements included in the park were desired by the majority of the community. We then worked directly with community / garden / park leaders and the children's groups to design three different configurations for the park, so we could maximize the recreation opportunities in a relatively small space, creating three different design concept plans for the park. Once that was complete, we had each resident vote on their favorite design to determine the final concept plan for the park.

How did the community garden idea evolve?

The community garden idea was already on site when the project began, as DUG and Mercy Housing created a small community garden several years earlier to help address food access for Mercy's residents, particularly those that had a background in agriculture (e.g. – Somali Bantu) to help them feel more at home in their new country. The old garden had about 15-20 plots that were irrigated by a garden hose that stretched across an ally from the apartment building, and demand for space was so high that there were physical altercations over garden space in the past. The new garden has over 50 plots with an irrigation system in place on flat terrain, making gardening far more productive than it once was. Given that the garden is often one of the few sources of fresh, healthy food for the community, this was one of the most important parts of the project.

What surprised you about working on this project?

How long the permitting process took with the City; it delayed construction far more than we had anticipated.

What were some of the most important lessons you learned?

The most important lesson was how critical it is to take a bottom-up approach to park design and engage the community directly regardless of much more work or effort it takes. The project was an outstanding success, but that only happened because the community designed the park and not the designers; all we did was implement the community's vision.

What are some of your favorite success stories from the park?

Here are some highlights: