The New York State Department of Education (NYSED) has recently released newly created draft language progressions for ELLs that it has developed via its Bilingual Common Core Initiative.

The state is seeking public comment on these materials until January 25, 2013. As you may be aware, New York State educates nearly a quarter million ELLs, so the potential impact of these standards on ELLs in New York is quite significant. Even if you are not teaching in New York, I believe it is worth your while to spend a few minutes taking a look at New York's efforts in this area to inform your own practice.

What is the Bilingual Common Core Initiative?

Begun in Spring 2012, NYSED launched the Bilingual Common Core Initiative to develop new English as a Second Language and Native Language Arts Standards aligned to the Common Core. The initiative’s website, which just went live last week, describes the initiative’s purpose as guiding how all teachers (including Bilingual, English as a Second Language, and teachers of Language Other Than English) can provide instruction that makes the Common Core standards accessible to ELLs who are at various language proficiency and literacy levels. 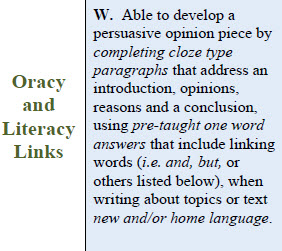 The draft Language Arts Progressions for both groups of ELLs contain the following elements:

In addition, the site contains a theoretical foundations document that undergirds the development of these progressions as well as a teachers’ guide to implementing the progressions. There are several sample language arts progressions available for view and comment on the website. You may also notice how New York’s National Advisory Group that supports this initiative contains some familiar names in the field of implementing the CCSS for ELLs.

I encourage you to take New York’s sample standards for a spin and let us - and NYSED - know what you think of their multifaceted efforts that encompass ELLs learning language through different pathways.

Thanks for the thoughtful presentation! It gave me instant PD that matters:)

Thanks for your comment, Mary Ann. I'm glad you found the information useful!

It should be emphasized that students at all five levels are expected to
work with the same grade level texts.
Thus, the Progressions demonstrate that with appropriate supports all
learners can engage meaningfully with grade level text to meet the expectations of the Common Core, rather than working with simplified texts or lower level texts. The difference between the levels is not with the complexity of the text or rigor of the content, but instead with the amount of scaffolding provided for students to access the grade level text that all students work with. (Page 2-3, Theoretical Foundations)

I understand the rationale behind this practice to a degree and some of the issues with adapted/simplified text, but where is the research that states giving low proficiency ELLs (Levels 1-2) grade level text promotes the most language and literacy development. This and other ELP standards seem to be saying it is the grade level text that makes the task cognitively demanding. It seems that some students at Level 1-2 could actually be doing higher level cognitive tasks with text they can negotiate and learn from. The NYS Strands seem to be encouraging constantly giving text that students can't ever read on their own or likely really interact with at Proficiency Levels 1-2 (particularly at higher grade levels) I get that scaffolds support their understanding, but it does not seem that it will ever help these ELL develop reading skills. There are good lower literacy level texts out there such as ACCESS SCIENCE that have text structure and grammatical patterns, and vocabulary that are authentic to the content and the language of the content, but are not nearly as dense or as prohibitive as a grade level science text.

Students who are at the early phases of learning English, only become frustrated and disengaged when they read texts that are above their zone of proximal development. It is unfair and even abusive to force students to read texts that they are unable to navigate meaningfully. What happened to the well researched premise of developmentally appropriate reading levels ? It is unreasonable to think that an ELL who is at the entering or emerging, levels, can read , for example, a 5th grade text . The idea that enough scaffolds can bridge this gap is misguided and ultimately results in turning curious and eager to learn students into frustrated and demoralized ones. Why would we want this to happen???

My comment was not posted. Would you kindly inform me as to why - THANK YOU

Kate, you make some very good points. I'd encourage you to read this blog post (http://www.colorincolorado.org/blog/wonderful-week-webinars) and also this one (http://www.colorincolorado.org/blog/determining-how-much-background-know...) to learn more about the balance between giving ELLs access to grade level text and also providing them texts that are also at their reading level.