Summer Slide and ELLs: What You Need to Know

As the current school year winds down, I'm coming across several articles and blog posts on the "summer slide" phenomenon. The term summer slide refers to the learning loss that many students experience during summer vacation.

This blog post highlights how the summer slide phenomenon tends to play out for ELLs and shares some resources for combating summer slide for ELLs. It ends with a case study about how the threat of summer slide looms for a nine-year-old Haitian student in Brooklyn, NY who is learning to meet the Common Core State Standards. I'll leave you with a chance to share ways you're supporting your ELLs' learning throughout the summer months.

The National Summer Learning Association highlights research that shows there are stark summer slide differences among students from different levels of socioeconomic status. While summer slide is an issue for many students, students from low-income homes who don't often have access to the same academically focused summer camps and programs as their higher-income peers tend to slide further behind academically during the summer.

For example, I was amazed by the local Fairfax, VA summer camp catalog I recently viewed. The choices were vast – from public speaking for third graders, to stop-motion animation for fifth graders, to Newtonian physics for seventh graders – but the sticker shock I experienced was also enormous! Reading through this catalog and calculating the costs to send children to these camps was a stark reminder that many summer enrichment activities are a luxury that many ELL families and caregivers will not be able to afford. Dr. Pedro Noguera poignantly points out these types of inequities between the "haves" and the "have-nots," explaining the summer learning gap and its effects on ELLs' achievement in this brief video clip from his expert interview with Colorín Colorado.

(On a related note, another summer challenge for low-income students is health-related: weight gain. This article explains the connection, referring to indoor and sedentary activities like playing video games, coupled with more snacking, no access to school meals, limited access to outdoor activities, and large amounts of unsupervised time.)

Many educators are focusing their efforts on reducing summer slide. For example, a blog post on Edutopia offers suggestions on how teachers can set up activities to keep students reading and writing throughout the summer. Some of the suggestions include setting up a Google document for students to add titles of the books they've read and working with the local library to develop student-run volunteer programs.

ELL blogger Larry Ferlazzo has compiled resources on summer slide in general and recently wrote two blog posts on preventing summer slide for the ELLs he teaches. He shared eleven websites he's using for his "virtual classroom" here. He spends classroom time getting his ELLs set up on these sites before the end of the school year so they can continue their language learning throughout the summer, an approach he developed when summer school budgets were cut at his school. In his second post, he added a few more online sites.

It's important to note that both bloggers feature ideas that depend on students' regular access to technology. Teachers interested in engaging students over the summer with technology should be familiar with the kinds of technology to which students have access, and be sure not to make assumptions about that access in either direction. Some students may have no access to any technology over the summer and may not be able to get to the library or another place to use computers until school is back in session. Others may have more access than expected, which is why it is so important for teachers to determine each student's situation when planning any summer activities.

In the case of the Edutopia blogger, there is also a description of "typical" summer experiences that students will enjoy: "...summer is important to get a different kind of education. It's the time for soccer camps, theater camps, debate camps, cooking camps. It's the time for building forts made out of branches between the hours of nine and three, for meeting other kids down the block, for reading the books you want to read, and for vacations in far off lands or in campgrounds in your own backyard." While these experiences may be typical for some families, they are not so typical for other families.  This statement is a reminder of the ways in which educators may need ESL teachers' support to see that ELLs' experiences tend to be different than those of non-ELLs and to adapt ideas to fit their students' situations. 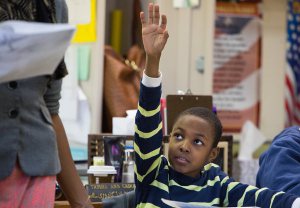 In researching summer slide for ELLs, I was particularly struck by a recent New York Times article about a nine-year-old Haitian student named Chrispin, who has struggled with Common Core instruction and assessments. Chrispin, who is one of a set of triplets and had been an excellent student in earlier grades, struggled with such Common Core hallmarks such as using evidence to support arguments and figuring out word problems in math throughout the school year.

He ultimately benefited from his own efforts, multiple stakeholders' interest in him, and targeted instruction to address his challenges. Notably, his sister, who seemed to excel with the Common Core, worked with him at home, and his mother established the tone for academic success in his family. His teacher believed that, with patience, her students could succeed with the Core and continued to support the class's efforts to master the new standards, particularly for students like Chrispin who were struggling. And Chrispin himself put time in to his academics that helped him turn a corner.

The amount of work it took to help Chrispin progress and regain his confidence was significant. And while Chrispin ultimately was successful in passing to 5th grade, it was also clear that he won't have sustained practice over the summer with the CCSS skills he acquired through so much effort during the year. I can only wonder how much he'll slide academically during the summer and if he'll need to relearn some of the skills necessary for the CCSS again in the fall. It's interesting to note that in his mind, part of his anguish about the tests was whether he would be able to spend his summer with friends, family, and his Xbox 360 or whether he'd have to attend summer school due to his test scores.

Reading this article made me wonder how kids like Chrispin can retain the focus on such CCSS shifts as reading informational text, citing evidence from text, and using academic language on their own throughout the summer months. Although I firmly believe students should be reading for pleasure, especially during the summer, I struggle with the notion of how they can keep up with CCSS strategies for engaging with texts that they've worked on with their teachers and families during the school year.

I'm left thinking that students who have ample access to engaging activities and conversations over the summer might be better positioned to jump back into the Common Core than kids whose interactions and learning don't have a direct connection to the types of skills that the CCSS seems to value. Maybe we need to reevaluate how we can weave in critical thinking and inquiry with kids like Chrispin's highly anticipated downtime with friends and family – and even the Xbox. I'd also suggest that we look at how we can learn about and tie in our ELLs' special summertime funds of knowledge with CCSS skills to give them a better chance to work with the CCSS again in the fall.

In addition to Larry's summer slide resources above, Colorín Colorado and Reading Rockets have compiled some resources on keeping ELLs academically engaged during the summer. Take a look here:

What are the obstacles that your ELLs face during the summer months? What promising practices are you seeing to help prevent their summer slide, especially when it comes to the CCSS?

This is a great post about an important topic. The risk is greater for ELLs to experience summer learning loss, so the efforts we make have to be greater. I will share this link on my blog where I wrote about supporting preschool ELLs/DLLs over the summer so they can be ready for school in September here: http://www.languagecastle.com/2014/06/summer-learning-day-preschool-dlls/ We all need to put our heads together and be willing to do a little more to ensure that our students are ready to move forward - and not backward - over the summer!

Kids sit all day in school. The food served in school is far from nutritious. I don't see this as being factual: (On a related note, another summer challenge for low-income students is health-related: weight gain. This article from VOXXI explains the connection, referring to indoor and sedentary activities like playing video games, coupled with more snacking, no access to school meals, limited access to outdoor activities, and large amounts of unsupervised time.)