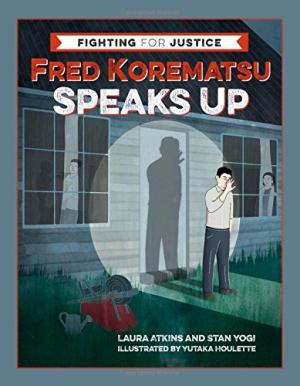 From School Library Journal: "A compelling blend of free verse, expository text, and artwork illuminates the life and times of Japanese American activist Fred Korematsu. Growing up in Oakland, the child of Japanese immigrants, Korematsu was a typical American kid, joining the Boy Scouts and dancing to big band music. Following Pearl Harbor, he refused to enter the internment camps, instead pretending to be Spanish Hawaiian. His eventual discovery resulted in imprisonment; censure from his family and fellow internees, who feared his noncooperation would make life harder for everyone; and a partnership with an ACLU lawyer. In 1944 the U.S. Supreme Court decided against him, deeming internment justified on grounds of national security. Korematsu lived quietly until the early 1980s, when his case was reopened due to evidence of government misconduct. This time he prevailed, paving the way for the Civil Liberties Act of 1988. Korematsu dedicated the rest of his life to advocating for social justice.

"This inspirational work hooks readers through a variety of formats, including dramatic illustrations and direct questions ('Have you ever been an ally to someone who needed help?'). Primary source documents vividly bring the period to life, while time lines and descriptions of contemporary struggles for equality by Chinese, Mexican, and African Americans, among others, offer meaningful context. An endnote provides suggestions for young people who wish to take action against injustice as well as a poignant statement from Korematsu's daughter."