Eve Bunting likes to write "stories for little children that make them think." The author of more than 200 books for young readers, she is best known for picture books that address difficult topics in heartfelt ways. Her 1995 book, Smoky Night, for example, is a story of tolerance and friendship set amidst the chaotic violence of the Los Angeles riots. Bunting's Fly Away Home, about a homeless man and his son living in the Chicago airport, received the "Heal the World Award" from schoolchildren.

A number of Eve Bunting's books deal with the hopes and hardships of immigrants coming to the United States. That topic is especially close to her heart because Eve Bunting, her husband, and their three small children left Northern Ireland in 1958 to start a new life in California.

Eve Bunting gave a delightful interview to Reading Rockets, filled with amusing stories from her childhood and insights about her books. To learn more about this Irish author who isn't afraid to tackle tough subjects, click on the links below.

From Northern Ireland to Los Angeles

Eve Bunting grew up an only child in the village of Maghera, Northern Ireland. Her father was a "tough, gruff, old Irishman," who would read poetry to her while she sat on his lap. Bunting's mother, also an avid reader, started a community lending library out of their home. When Eve was seven, her parents sent her off to boarding school, where she received a good education and made close friends who became like sisters.

During college, Eve met and married Ed Bunting. The couple lived for a number of years in Belfast, where Ed worked as a personnel manager for an American company and Eve stayed home to take care of their three children. At the time, Ed's brother lived in the United States and encouraged them to move overseas. It was a tempting offer, because they had been frustrated with Ireland's depressed economy, religious discrimination, and rainy climate. In 1958, the Buntings packed up and moved their life to California.

Eve Bunting began writing in 1969 when she took a writing class at Pasadena City College. In 1972 she published her first book, the retelling of an Irish folktale from her childhood. Since then, she has published over 200 books for young readers, ranging from picture books to young adult novels. Bunting's books have received numerous awards, including the Caldecott Medal and the Golden Kite Award.

Eve Bunting and her husband have been married for over 50 years. For the past 40 years, they have lived in the same house in Los Angeles. Every so often, the Buntings travel back to Northern Ireland and inevitably visit her hometown of Maghera, which has grown from a village into a town with a true public library. An entire section of the library is dedicated to the books of Eve Bunting, whom townspeople still consider a local author.

When his grandfather arrives from Mexico, Francisco helps him find work as a gardener even though he is really a carpenter. When they mistakenly pull all the plants but leave the weeds, Abuelo, upset at Francisco's lie, refuses to accept payment until the job is done correctly. 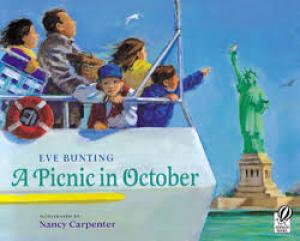 Tony is not looking forward to his family's annual picnic at Liberty Island in October. Nevertheless, his grandmother insists that they maintain the tradition of celebrating her birthday with Lady Liberty. At first it doesn't seem like much fun — until Tony finally begins to understand why the Statue of Liberty means so much to his grandmother. Lovely colorful acrylic paintings bring this special tribute to life. 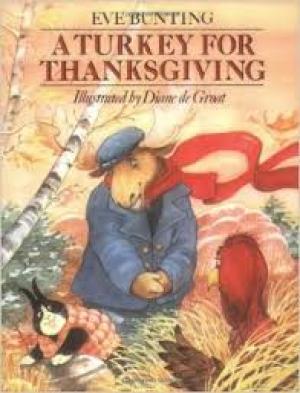 Mr. and Mrs. Moose invite all their animal friends for Thanksgiving dinner. The only one missing is Turkey. They set out to find him, not realizing that Turkey is quaking with fear because he thinks his hosts want him on their table, not at it. 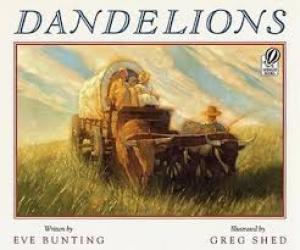 When Zoe and her family move to the Nebraska prairie, it is the isolation and sameness of the landscape that depresses her mother most. A simple clump of dandelions planted on the roof of their sod house, however, provides color and hope. 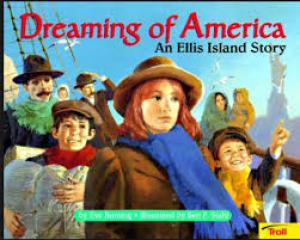 Eve Bunting tells the inspiring true story of the first Ellis Island immigrant, fifteen-year-old Annie Moore of Cork, Ireland. An afterword provides information about Annie and her family. Photos are paired with the vibrant illustrations. 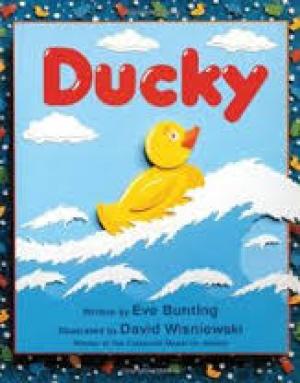 A rubber duck is among the bathtub toys washed overboard and into the ocean. After a long journey, the duck narrator is found by a child.  Inspired by actual events and vividly illustrated with textured paper cut images. 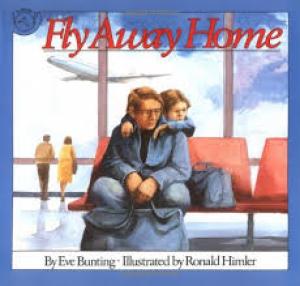 A boy tells of his life living in an airport with his dad, remaining unnoticed but noticing how others seem to have so much. Homelessness is realistically portrayed in this bestselling book with sensitivity and hope. 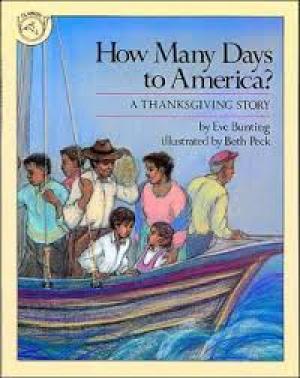 After the soldiers come, Papa tells his family that they must leave everything behind and set sail for America. The journey across the Caribbean is dangerous and long, and our narrator and his little sister keep asking — just how many days is it to America? Prolific children's author Eve Bunting, herself an immigrant from Ireland, shares the story of a new generation of pilgrims who are willing to risk their lives to look for freedom in America. Product Description: David likes his family the way it has always been, just him and Mom and Dad. He never wanted to be a big brother. And he certainly didn't want Jin Woo, the little baby from Korea, to join the family. Now his new little brother is getting all the attention, and David feels as if no one cares about him anymore. But then a surprising letter helps him to understand that being a brother can mean being surrounded with more love than ever. 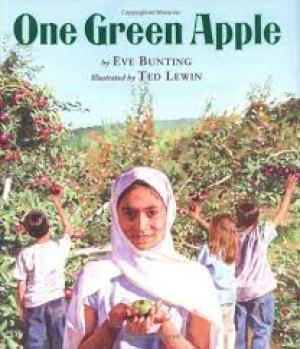 In this heartwarming story, Farah is trying to get used to a new country and language. She knows what's happening around her, but without the words to say what she's thinking in English, she feels alienated from her classmates. A trip to the apple orchard helps her begin to bridge those gaps, however, and she realizes that "Laughs sound the same as at home." As she practices her first "outside-myself word," she knows that she will be able to say more in time. Beautiful watercolor illustrations bring Farah, her classmates, and the apple orchard to life.