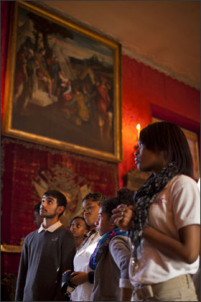 Ninth graders from the Edward M. Kennedy Academy for Health Careers tour the Isabella Stewart Gardner Museum in Boston. The museum, housed in a Venetian-style palace with three stories of galleries, helps students tap into the common standards.
—Dominick Reuter for Education Week

Earlier in December, Education Week published an article about the connections between arts education and the new Common Core State Standards (CCSS) written by reporter Erik Robelen.  The article featured school districts and art institutions such as the Isabella Stewart Gardner Museum in Boston that are making that connection explicit through programming and curriculum development.

One point in particular by Michelle A. Grohe, the director of school and teacher programs at the Gardner Museum, caught my attention.  She notes that, "When one of our schools is focusing on 'close' readings, to read an excerpt of text and describe the main idea and provide supporting evidence or details, that is very similar to what we do with the visual arts."

Robelen returns to Ms. Grohe’s point later in the article:

"When students first encounter a piece of art, they are asked to spend a few minutes looking silently at the image, Ms. Grohe said. Their guide begins by asking what's going on in the artwork. As students share impressions, they are asked, 'What makes you say that?'—a question that directly ties to multiple common-core standards for evidentiary reasoning in both English/language arts and math, she said.

"A third question, Ms. Grohe said, is "What more can we find?'

"By spending 15 to 20 minutes at a time with one work of art, 'the students learn to slow down and look carefully, attention skills that also are used when grappling with new or unfamiliar text, math equations, or problems,' she said."

Ms. Grohe’s approach is particularly relevant to CCSS lesson planning since the standards do in fact explicitly touch upon the arts through activities such as the comparison of filmed or live versions of text and analysis of illustrations.  In addition, Robelen reports that some schools and districts are exploring the use of the arts with the Common Core math standards, such as the musical or visual representation of geometric patterns.  (For more on the arts and STEM fields, see Robelen’s 2011 Education Week article, STEAM: Experts Make Case for Adding Arts to STEM.)

The Arts and ELLs

This discussion of the arts and the CCSS got me thinking about the arts and English language learners. Unfortunately, the first image that came to my mind was the unproductive practice of sending ELLs to the back of the room with a box of crayons and a coloring sheet while the class continues its content lesson for the day. 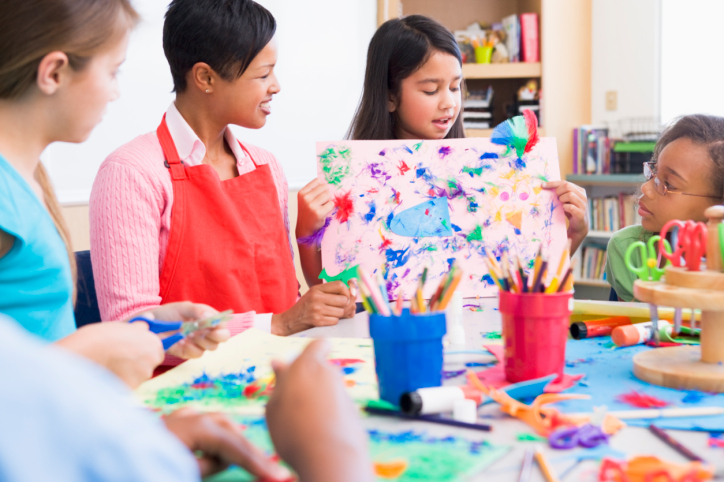 Yet just as ELLs need to access content in science and math and social studies, they can benefit from a rich arts education experience as well, with the opportunity to develop their language, literacy, and writing skills by interacting with different forms of art and media such as drama, film, visual and graphic arts, music, and dance. Imagine the benefits of having ELLs spend an extended period of time with a piece of art or music, as Ms. Grohe describes, while providing them with vocabulary words, background knowledge, and critical thinking activities.

The benefits aren't strictly academic, however - the arts can also provide ELLs with a chance to build confidence and express themselves in ways that showcase strengths that aren’t necessarily apparent in the classroom setting, as noted by award-winning illustrator Rafael López in his interview clip “Art in schools.”

In addition, the arts offer ELLs a setting in which to share their own experiences and cultural background with their peers, an exercise which is valuable in and of itself but also dovetails with the Common Core’s emphasis on the ability to “understand other perspectives and cultures” as part of a 21st-century skill set.

For further discussion of using the arts with ELLs, and how arts education can support language and literacy development, take a look at the following:

I’ll close with a final thought from Robelen regarding arts education and our current budget climate: “Embracing the common core may be something of a survival strategy for the arts in schools, some experts suggest, given how much time, energy, and resources districts and schools are devoting to the standards.”

What do you think? Are you seeing any connections being made between the arts and the Common Core, or the arts and your ELLs?  Have you had related experiences with your students? We’d love to hear from you!