A Word Beginning with "T": "Maestra" 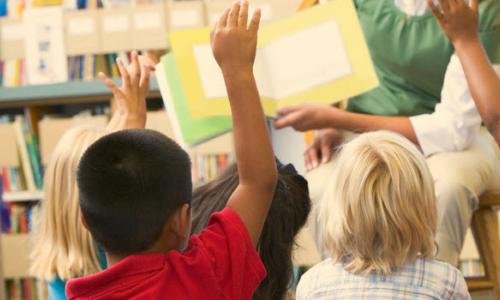 In this excerpt from Special Education Considerations for English Language Learners (Caslon, Inc., 2013), a bilingual coordinator shares an experience which highlights the importance of collaborating with bilingual staff when discussing ELLs' learning needs.

The Tendency to Choose Intrinsic Explanations

A kindergarten teacher asked me to observe a student in her class. She was concerned that this child was not able to discriminate initial consonant sounds in words. When I arrived, I was impressed with her class. All the students were very engaged in engaged in learning, and she made instruction comprehensible through the use of visuals, manipulatives, pictures, and many gestures and facial expressions to accompany what she said. I noticed that the children had dictated a language experience story about their school routines, and the teacher had written out the entire story on large chart paper. The dictated story was being used as a meaningful context to teach some skills to the students.

The day I visited the class, the teacher concentrated on initial consonant sounds that I could observe the ELL student in question. She asked the students to think of words from the story that started with the /t/ sound. The students "read" aloud the story they had dictated and stopped when they heard words that started with the /t/ sounds. She asked what that word meant, and the students took turns answering orally or with gestures, then they moved on to the next example. It was great to hear the students read their story. I was watching the ELL student in her class. He seemed very attentive and paid close attention to everything in the lesson.

Afterward, she asked different students to tell the class a word that started with the /t/ sound. The native English-speaking students gave examples: "tooth, treat, tower," they yelled. Finally the ELL child raised his hand. The teacher asked if he had a word that started with the /t/ sound, and he nodded yes. "Maestra" he blurted out confidently. She looked at me with a great deal of concern. She asked him if he was sure, and he said yes. She gently pointed out that the word he had mentioned started with the /m/ sound. The ELL student seemed confused, and looked down at the carpet.

After the lesson, the teacher and I had an opportunity to talk about what happened. She was glad that I had witnessed the student's difficulty. What I told her that maestra was Spanish for "teacher," her eyes opened wide and she shook her head. We realized that the student had understood exactly what the teacher was asking of him, but he didn't speak enough English yet to say all the words he understood. I assured her that it is common for second language learners to have a larger receptive vocabulary than expressive. The teacher's face lit up with this realization. She had thought that she was not getting through to the student and didn't know what else to do. She was beginning to doubt herself and started to think that his difficulties must be due to something intrinsic.

I told her that it is always a good idea to get support from ESL/bilingual staff when she had concerns about any ELL student. I suggested that she continue to find ways to assess what her students knew separately from their ability to tell her in English. She immediately thought of an example. "What if during that exercise I had given the students visuals to use in supporting their oral answers? Also, I could have allowed them to share their answers through gestures." Even if her ELL had answered in his native language, she would have known that he understood because he would have shown her a picture of a teacher or pointed at her when he said maestra.

I am frustrated with the lack of resources available to point out such insightful observations such as this. Can anyone suggest resources that pinpoint linguistic behaviors?

How could the native language be used to validate the difficulty that the student was having?

I think the teacher could have used a students who spoke some Spanish to help the ELL answer the question in English. Also, the teacher should try to embrace the culture and language the ELL brings into the classroom; having some words or pictures used in the story translated to Spanish could have helped the ELL answer more efficiently in English.

What else could the teacher do to assess the student's knowledge of concepts and skills? The teacher could have done a better job of distinguishing between meaning of word and pronunciation of word. She could have repeated multiple words with the 't' sound and have the ELL repeat her. After that is understood or assessed move onto meaning of word.

Regarding the knowledge of second language acquisition as it pertains to teaching, if the teacher in this example had been more on the look out for language acquisition processes such as transfer (noting that the Spanish word for 'teacher' may not begin with a 't', even if the student has the right idea), they would be slower to jump to conclusions and more likely to identify when a student is having learning difficulties vs. when the simply lack the vocabulary to express their otherwise correct understanding.