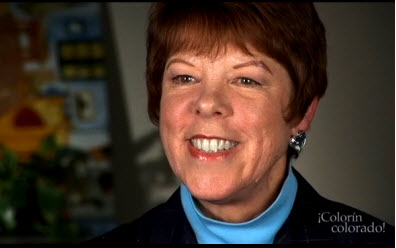 Hi everyone!  Diane is at NABE 2013 this week, so I’m filling in for our weekly post.

With so much news about the Common Core State Standards coming across the wires each day, it’s easy to feel overwhelmed!   I was recently reminded, however, of my video interview last year with Dr. Joanne Urrutia of the U.S. Department of Education’s Office of English Language Acquisition (OELA), which offers some hope regarding the CCSS in the midst of information overload.  (The interview is also available on YouTube.)

In the interview, Dr. Urrutia provides some helpful context about how policy decisions affect English language learners (ELLs). As part of the interview playlist titled “New Standards,” she speaks about the importance of college- and career-ready standards for ELLs, clarifying the Department’s role in the implementation of these new standards. For example, she makes an important distinction between state and federal responsibilities with regards to language proficiency standards, noting that while states are responsible for aligning their English language proficiency standards to college- and career-ready standards, the role of the U.S. Department of Education is to help guide the process instead by looking at the big picture.

She says,  “The Department can provide resources in the area of research and ask experts to take a look at language proficiency standards and assist in determining, ‘Look, what are the skills that are needed so that English learners are ready and are able to access this rigorous academic content that is part of the college- and career-standards?’"  It will be interesting to see what direction that federal guidance goes in as more states grapple with alignment issues and as educators dig in to what the standards will look like in the classroom.

Dr. Urrutia also shares two highlights from her 35 years’ experience as an educator and administrator in the Miami-Dade County School District.  The first was building a dual-language program at a Title I school serving a largely African-American community, Laura Park Elementary, which is a story worth hearing!

The second was her experience, as the district’s administrative director for the Division of Bilingual Education and World Languages, with a new ELL standards initiative in Miami for elementary, middle, and high school students several years ago. As part of that initiative, Miami educators were told by the state that they needed to provide ELLs with access to grade-level instruction.  She remembered that the going was tough and that it took a lot of hard work over a couple of years to make the shifts needed – sound familiar? Eventually, however, the new system began to work and some big lessons emerged from the process, such as the realization that this was the first time the ESL teachers had an opportunity to really get to know the Language Arts curriculum that the kids were supposed to be mastering outside of the ESL classroom.

In addition, since Spanish-language instruction is a fixture in Miami schools, the district mapped Spanish Language Arts standards with the ELA standards so that ELLs were getting a double dose of Language Arts skills in English and Spanish – perhaps an idea for those who wonder what the CCSS means for bilingual education models. (For information on districts currently working on adapting the CCSS for dual-language programs, see this October 2012 blog post from Lesli Maxwell at Education Week.)

In the midst of the debate and uncertainty surrounding CCSS, it is helpful to hear from someone who has gone through the growing pains of this kind of change and has come out of it in a better place. It’s important to learn from people who have experienced something similar before, like Dr. Urritia.

It is also reassuring to learn from those who are experiencing the CCSS now, such as Albuquerque teacher Miriam Martinez, also a member of the American Federation of Teachers’ ELL Educator Cadre and a participant in our CCSS work in Albuquerque. In a journal entry written for our CCSS project, she notes that while she's been around the block a few times when it comes to new standards, she's hopeful that the CCSS will have a more positive outcome than previous standards movements.

What about you? Have you learned lessons from earlier standards initiatives or curriculum changes that can be applied now to the Common Core?  We’d love to hear your comments!