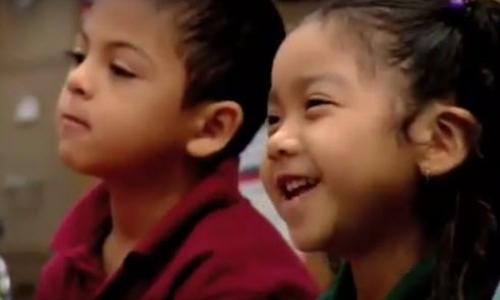 This article shares some ways that early Spanish and English literacy instruction are similar and different. It also explains the order in which reading skills are typically taught in Spanish and suggests activities in the classroom and at home that complement instruction.

Throughout the U.S., many children are receiving some or all of their literacy instruction in Spanish. Typically, these children are in one of three types of instructional programs:

Regardless of the type of program, all of these students have one thing in common. They are learning to read in a language that is in some ways very similar to English, but in other ways is very different.

Whether learning to read in Spanish or in English, children pass through three broad stages of literacy development:

To see Dr. Palacios in action in her preschool classroom, take a look at the "Reading Maestros" clip in our PBS show Toddling Toward Reading, hosted by Reba McEntire.

You can learn more in her Meet the Expert interview as well!

Spanish and English: What's the Same, and What's Different?

Spanish and English are both alphabetic languages, and therefore the process of learning to read is essentially the same in the two languages:

The primary difference between Spanish and English reading development and instruction occurs during the period in which children are learning to decode text. This is because of differences in the two languages' orthographies, or spelling systems.

There is one caveat, however. In Spanish, unlike in English, reading accuracy is not a strong predictor of reading comprehension (Escribano, Elosúa, Gómez-Veiga, & García-Madruga, 2013). Children can often decode text far beyond the level at which they have good comprehension of what they are reading, and this drop in comprehension is usually accompanied by a drop in reading rate. The challenge for teachers is to place students in texts that they can not only read accurately but can also read at a good rate and with good comprehension.

Instruction for the Beginning Reader in Spanish

Much of early reading instruction in English is devoted to teaching children the English vowel sounds. Like Spanish, English has five vowel letters (a, e, i, o, and u), but those five letters can make 12 different vowel sounds, depending on the spelling patterns of the words in which they occur. For example, the letter a represents three different sounds in the words cat, car, and came. In Spanish, however, each vowel letter makes just one sound, no matter what spelling pattern it appears in, and this greatly simplifies early reading instruction.

In fact, children begin learning to read in Spanish by first learning the five vowel sounds. They then learn to combine the vowels with consonants to form open syllables (e.g., ma, me, mi, mo, mu). Open syllables, or syllables that follow a consonant-vowel (CV) pattern, represent the most frequently occurring syllable pattern in Spanish. Reading instruction begins with the consonants that are easiest for children to distinguish the sounds of and to blend with vowels (i.e., m, n, b, p, s, l, d, t, and f). Consonants are introduced one at a time and practiced with consonants that have been learned previously. For example, children who have learned m, n, t, and p syllables might practice reading words like tapa, Papi, and mano.

As children start to become adept at reading words made up of simple open syllables, they can begin examining words that include closed syllables following the VC or CVC pattern (e.g., alto and pan), as well as words with consonant blends (e.g., clase, grande, etc.) and diphthongs (e.g., baile, auto, etc.).

Although Spanish has a highly predictable orthography, there are a few silent letters (h is always silent, u is silent after g or q), as well as letters that can make different sounds, depending on the letters that follow them. For example, the letters c and g make one sound when followed by a, o, or u and a different sound when followed by e or i. For that reason, syllables with these letters are taught somewhat later in the progression. The same is true of syllables with infrequently occurring consonants, such as z, k, x and w.

Working with Syllables and Phonemes

It is important to recognize that as children learn to create new syllables by substituting for the initial consonant (i.e., changing ma, me, mi, mo, mu into ta, te, ti, to, tu), they are actually manipulating language at the phoneme, or single sound, level (Pollard-Durodola & Simmons, 2009). To make those changes, children have to be able to 1) segment the consonant sound from the vowel sound in each pair and 2) blend a new consonant sound with each vowel sound to create a new syllable.

This ability to segment speech at the individual phoneme level has been shown to differentiate good readers from average to poor readers in Spanish (Carillo, 1994). In fact, research has demonstrated that the ability to blend and segment individual phonemes is a strong predictor of overall reading achievement in Spanish, both for monolingual Spanish-speaking children (Bravo, 2006) and for Spanish/English bilingual children (Branum-Martin, 2006).

Calling children's attention to individual phonemes in Spanish words may serve a dual function for children learning to read in U.S. schools. Whether in transitional bilingual, dual language, or Spanish immersion settings, children attending school in the U.S. will at some point be expected to learn to read in English as well as in Spanish. Having experience working with language at the phoneme level in Spanish may make it easier for them to apply what they have learned about reading in Spanish as they take on the task of learning to read in English. As Pollard-Durodola and Simmons (2009) point out, "If phoneme blending and segmentation have been taught and mastered in Spanish, then it is conceivable that the linguistic readiness primed by instruction and practice in Spanish will facilitate transfer to English, therefore allowing English phonemic awareness instruction on high-priority skills to be abbreviated" (p. 147).

Beginning readers need to have lots of opportunities to practice reading and writing throughout the school day. Oral language development, both at home and at school, is also important so that children can attach meaning to the words they read. Below are some examples of language and literacy activities for teachers and parents. While these activities can be used in any language, we've provided some examples in Spanish.

Learning at Home: Tips for Parents

These bilingual resources are a great place to start in finding fun activities for early readers!

As many kindergarten and first-grade teachers will attest, working with beginning readers can be one of the most rewarding jobs in teaching. It's always exciting to watch young children gradually "crack the code" to figure out how written language works. Today, many children across the U.S. have the advantage of receiving early literacy instruction in Spanish, which fosters Spanish language as well as literacy development, both for native Spanish speakers and for children who are learning Spanish for the first time in dual language or Spanish immersion settings. Because many literacy skills tend to transfer across languages (August, Calderón, & Carlo, 2002; Durgunoglu, 2002), early literacy instruction in Spanish can also give children a head start on learning to read in English, putting them on track to becoming not only bilingual, but also biliterate.

Durgunoglu, A. Y. (2002). Cross-linguistic transfer in literacy development and implications for language learners. Annals of Dyslexia, 52, 189-204.