How to Support Immigrant Students and Families: Strategies for Schools and Early Childhood Programs

Introduction: How to Support Immigrant Students and Families 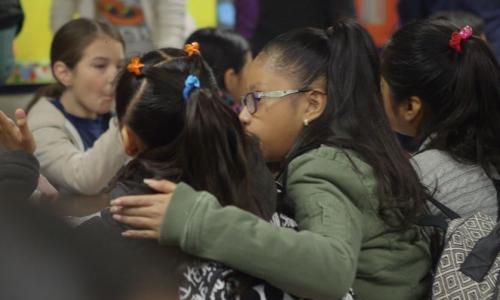 This introduction to our Colorín Colorado guide, How to Support Immigrant Students and Families: Strategies for Schools and Early Childhood Programs, provides a brief snapshot of the challenges facing immigrant students and families in U.S. schools.

We are trying to find answers for students and families we care deeply about.

Across the country, educators are looking for ways to support immigrant students and families facing great uncertainty. In some cases, these efforts have started at the top with district leaders, school board members, school principals, and early childhood program directors; in other cases, the efforts have been smaller and quieter, often taken on by a single individual whose actions ripple outward in meaningful ways.

Since educators and parents of English language learners (ELLs), many of whom are immigrants, refugees, and unaccompanied minors, are the heart of our audience, we have been tracking these issues very closely. This guide highlights strategies educators can use to ensure that schools and early childhood settings remain safe, welcoming places for all children. Our recommendations are based on input and examples from:

We also include responses to a survey we conducted in 2017 and research from the UCLA Civil Rights Project on the impact of immigration enforcement on schools. You can learn more about this research from our webinar with Dr. Patricia Gándara and Shena Sanchez. In addition, we include resources created and compiled by numerous organizations.

The examples throughout the guide showcase schools and early childhood centers that are striving to become more welcoming, build bridges with families, and create new leaders within their school community. It is our hope that other educators will find inspiration from their stories.

Who are immigrant students?

Immigrant students may include:

In their research on the impact of immigration enforcement on schools, The Civil Rights Project at UCLA shares the following data:

Californians Together reports that in the state of California:

Immigration policies have the potential to affect millions of students in U.S. schools and early childhood settings, particularly when taking into account the combined impact of intensifying immigration enforcement measures, travel restrictions, changes to Temporary Protected Status programs and DACA, and changes to U.S. visa programs or rules regarding immigration status.

How do these issues impact schools?

All students in public K-12 schools have certain educational, civil, and privacy rights regardless of immigration status. It is critical for schools and districts to understand what those rights are; to review whether their policies protect those rights for all students; and how those policies are being implemented throughout the district.

At the same time, changes to federal immigration policies have resulted in two trends that this guide addresses:

While not all students are having these experiences and many demonstrate high levels of resilience, researchers have documented some trends nationally, which include:

While educators should never make assumptions about a family's situation, it is important to note that even if students or families haven’t mentioned these concerns, they still may be experiencing these issues and not sharing them with others. (For an in-depth discussion about immigrant students' silence when it comes to discussions of immigration or citizenship, see our related section on this topic.)

In addition, immigration enforcement activity (or the fear of such activity) can impact student attendance, participation in school activities, and parental engagement in both K-12 and early childhood settings, particularly as schools grapple with ways to increase student safety and school security. For example, Dr. Eva Thorp (2017) writes that many teachers she has worked with "report that immigrant parent participation in school-based or volunteer activities has decreased in part…because of extra security measures, which may deter immigrant families from feeling that the can safely enter the school building." These steps might include leaving a photo identification at the front office, for example, in order to visit a child's classroom (p. 36).

These impacts are not limited just to immigrant students – classmates and educators can be affected by these trends and events as well, as described in our article about a massive immigration raid in Postville, Iowa in 2008. Many educators nationwide are reporting increased levels of stress and anxiety among other students and classmates, educators, staff, and the broader school community with respect to immigration issues and immigration enforcement in particular.

In our webinar about the UCLA research on the impact of immigration enforcement in schools, Dr. Gándara notes, "More than ever, it is important to reinforce [to immigrant students]: 'We really want you here at this school. We care about you and we want you here'" (Gándara & Sanchez, 2018).

According to the National Association for Secondary School Principals (NASSP), arrests due to immigration enforcement increased by 300% from 2017 to 2018. In addition, NASSP cites research from the Urban Institute and UnidosUS (formerly National Council of La Raza) conducted in communities affected by immigration raids finding that “the number of children affected was about half the number of adults arrested.”

In some cases, where school officials had prior notification of the raids:

(S)chools were able to ensure that students whose parents were detained in the raids had a safe place to go after school. School leaders and teachers reported that they felt ‘a heavy burden’ helping the students maintain a normal school routine while dealing with the aftermath of the raids. The fear created for immigrant parents and students resulted in symptoms of mental health problems that affected students’ academic performance. Months after the raids, however, students seemed to have benefited from normalized school routines and the support and services provided by their schools. (p. 2)

For comprehensive data on immigration, look at the Migration Data Hub from the Migration Policy Institute, as well as the resource library compiled by Grantmakers Concerned with Immigrants and Refugees (GCIR).

GCIR has also published a guide entitled, “What Can Philanthropy Do? Coming Together for Children in Immigrant in a Changing Policy Landscape.”

For in-depth research on immigrant students (including undocumented and refugee students), see the work of the following centers and scholars:

See our complete reference list for works cited in this article.